Where the Rebellion Went Too Far 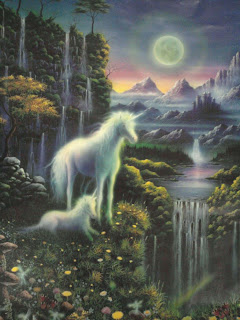 Where I first fell in love with unreality. I believe I was sitting in my room—back against my closet—toes digging into my rug—book in hand. My eyes feasted on the unreality hidden among those pages. It was a fantasy world all my own. A dark yet starry night. Mountains and valleys. A waterfall crashing to the depths below. Look closely; see those blinking lights? They are no fire-flies—they are tiny fairies. Luminous creatures, sparkling in the night. The most majestic is the unicorn. You can see her standing guard over her young filly. Gleaming white mane; and her horn—elegantly rising from her forehead. Purity. Beauty. Magic. Just one glimpse of her takes my breath away. I sit down on the grass and close my eyes. I hear the mumblings of little brownies as they head off to work. The screech of an owl—or perhaps it is the phoenix preparing for a nights rest. The air is warm and smells of fresh life. (November 4, 2010)

Email ThisBlogThis!Share to TwitterShare to FacebookShare to Pinterest
Labels: Healing Journey, In This Life, Poetry and the Like

I thought we had friendship
a mutual love.
But now you shout, “Betrayal!”
and that you feel too much pain.
You act as if forgiveness
is too hard; that there will be no healing.

What about healing
within me? Does not friendship
see through one another’s eyes? Forgiveness
is the path of love.
Can you not see my pain?
And how I too sense betrayal?

I do not say, “Deny the betrayal,”
but why resist healing?
Is it the fear of feeling pain?
I appeal to our friendship
and the love
we once had. My hope is forgiveness—

for the type of forgiveness
that Christ gave after his own betrayal.
Can you imagine his capacity for love?
He can bring healing
for the two of us, restoration of friendship,
and slow removal of the pain.

I tell you, “Feel the pain,”
for it is real. But forgiveness
is possible in the grace of friendship.
Acknowledge the betrayal
if you must, but then pursue healing
through the power of love.

I beg you to hear this, “I love
you.” Forgive me for the pain
I’ve caused. May God bring healing.
I beg for your forgiveness
of my betrayal,
and make one last plea for our friendship.

There is healing in the love
of Christ. Friendship will always incur pain—
it is a hard reality that demands forgiveness of betrayal.
Posted by Jaime Wright at 9:10 PM No comments: